At ARION we are on a mission to decode human movement. After a decade of research, six years of operation, and thousands of hours of recorded movement data, one thing has become very clear to us. Movement is exceptionally unique.

We all have our own body types, varied techniques, unique philosophies and personal goals. All of these elements heavily influence the way we move. Each contributing to our individual biomechanical profile, is what we call, your unique running identity.

To explore this, in this content series we will highlight that there is no such thing as the perfect running shoes. It all depends on your own completely unique biomechanics and your individual goals. We will be testing eight of the latest and greatest running shoes. Utilising our groundbreaking technology shows how one shoe can have two very drastic results on two very seemingly similar people. 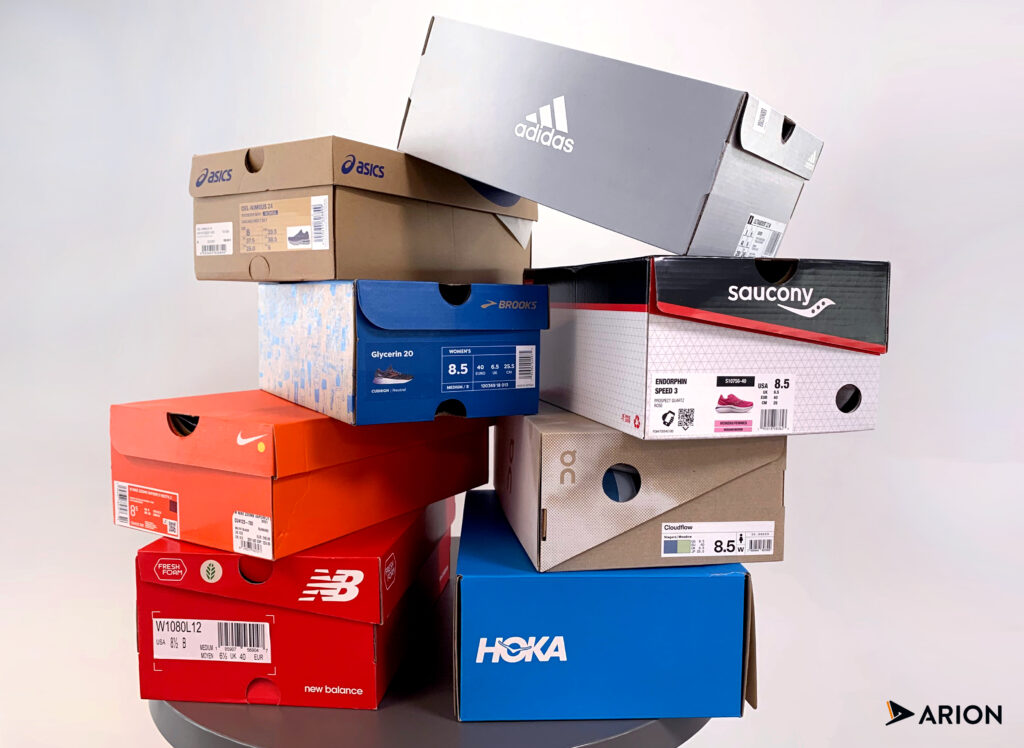 We don’t review the shoes based on their general performance. We simply highlight the diverse results generated across different people. Each month we will put a new pair of shoes to the test before finally reviewing it all together with a final summary of our movement experiment.

The Saucony Endorphin Speed 3 is a neutral running shoe with a heel-to-toe drop of 8mm. The running shoe is known for its SPEEDROLL Technology that helps you forward effortlessly. Together with its ultra-light and responsive PWRRUNPB foam cushioning, the shoes give you a light and fast feeling. The Saucony Endorphin Speed 3 is designed with a new winged plate that helps support your run from toe-off to landing. A shoe that fits your needs to push your pace with ease.

Let’s introduce our runners. Runner 1 is Manouk. She runs around once every two weeks for a longer run, and every week a couple of short runs to conduct research for ARION. Her preferred distance is around 5k with a pace between 5:15 and 5:30 min/km. A future goal for Manouk is to finish a quarter triathlon. She likes to run because she wants to stay in shape and doesn’t have time to take part in other sports.

Our second runner, runner 2 is Elzemieke. She runs around three times a week for long runs. Her preferred distance is around 5k with a pace between 6:15 and 6:30 min/km. A short-term goal for Elzemieke is to run a 10k race. Elzemieke likes to run because it clears her mind and to stay in shape. 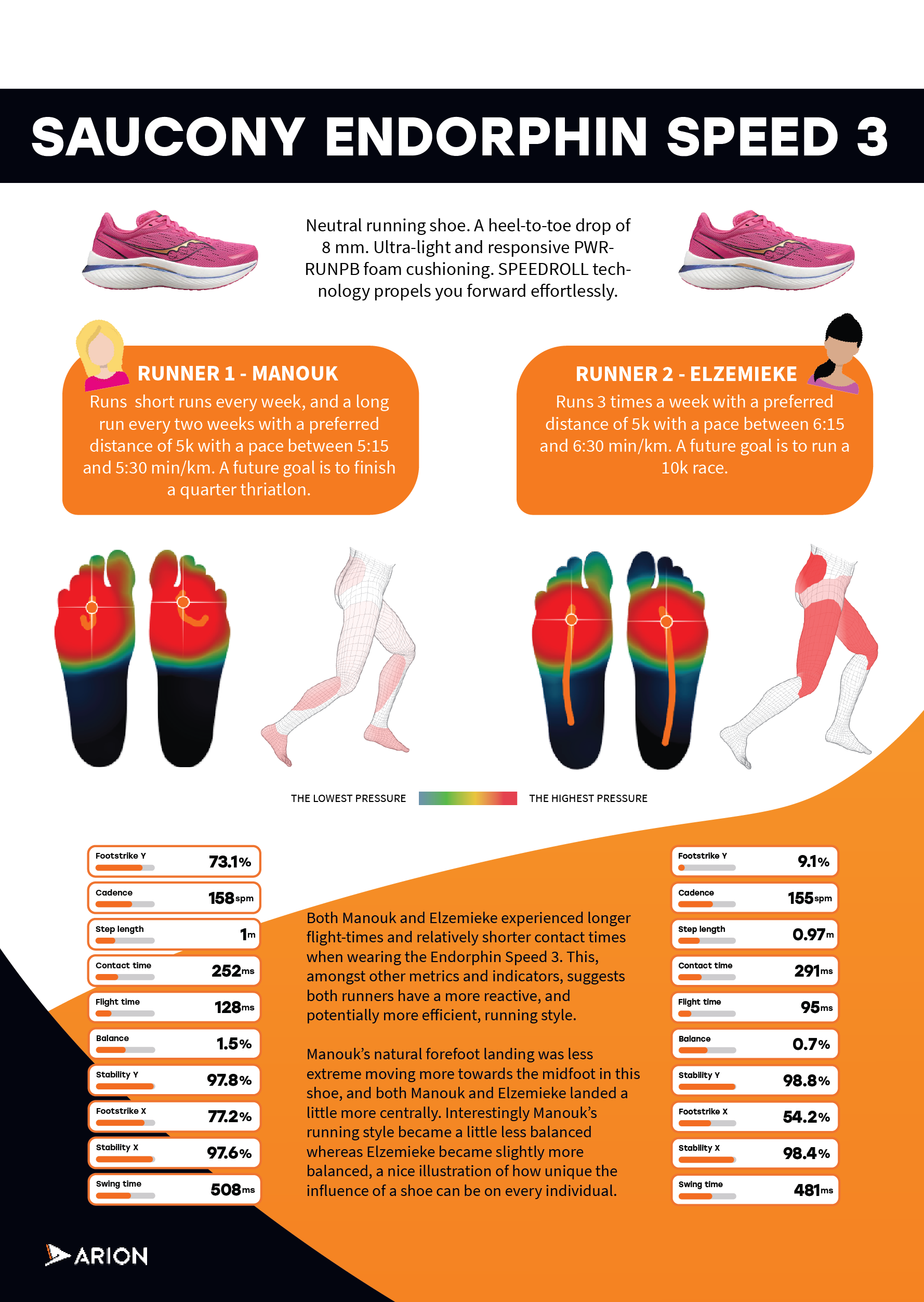 At 8 mm, the Saucony shoe has a relatively high heel-toe drop which often encourages runners to land more towards their heels. For Elzemieke, her rearfoot strike became even more pronounced by moving from 16% to 9.1%. Similarly, Manouk’s footstrike moves back from 78.2% in the baseline shoe, to a less extreme forefoot landing at 73.1%.

For Manouk, the Saucony shoe results in a slight increase in the loading on the calf muscles. While Elzemieke does not show a clear difference in the loading at different structures. This highlights the different responses of two individuals to the same shoe. 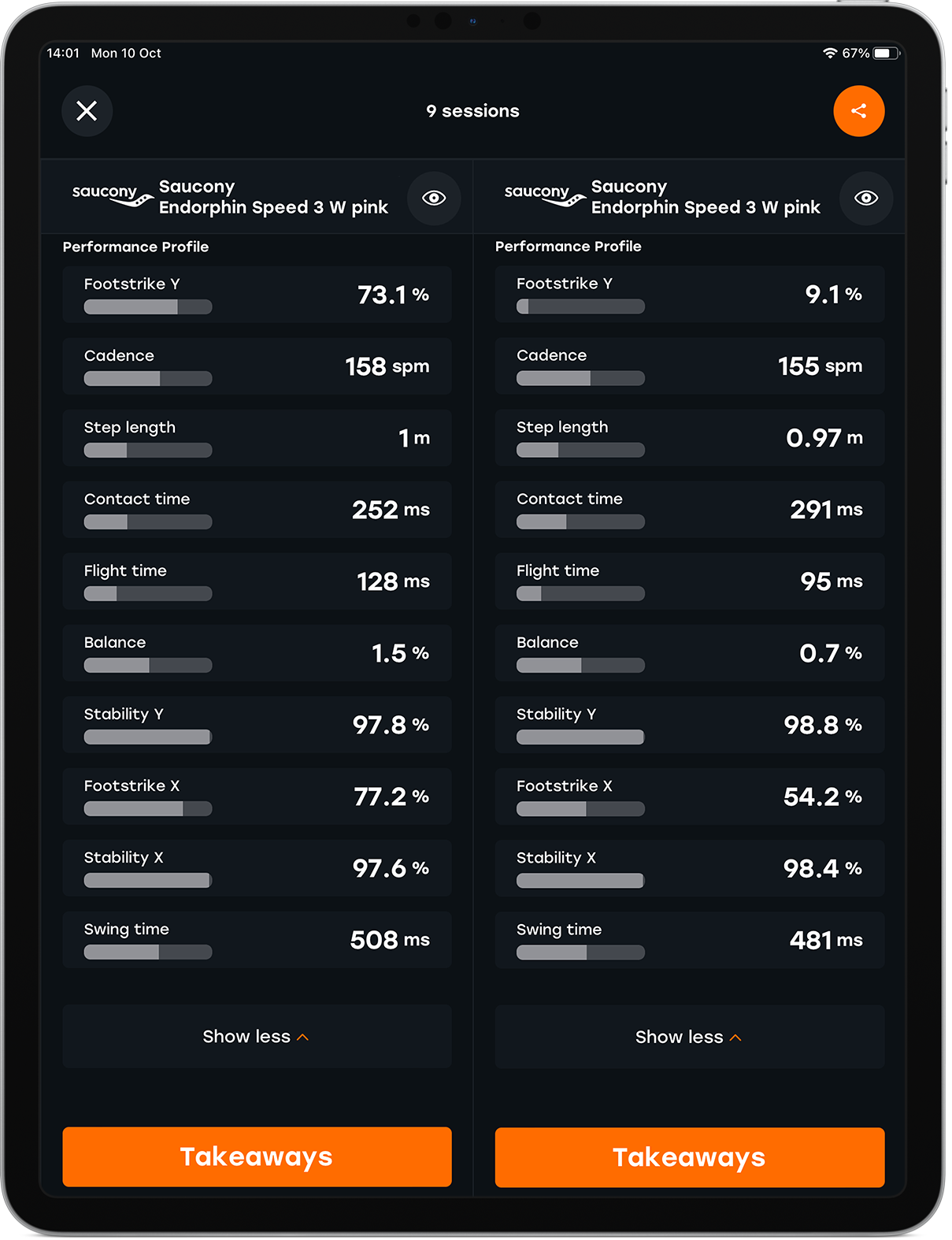 The flight time for Manouk increased from 117 ms in the baseline shoe to 128 ms in the Saucony shoe. Similarly, for Elzemieke, flight time increases slightly from 88 to 95 ms. This means that both runners spend less time on the ground, and more time in the air in the Saucony shoes, suggesting a more reactive and potentially more efficient running style. Suggesting also that both runners have much more benefit (amongst other metrics and indicators) towards running efficiency with the Saucony compared to the baseline shoe.

If we step back from all the data insights, the findings suggest that both Manouk and Elzemieke enjoy some benefits of this shoe, albeit, in slightly different ways. Both runners appear to run a little more reactively and potentially more efficiently with the Saucony shoe. The more central footstrike and less extreme forefoot landing may help Manouk with a more even distribution of loading during her running. On the other hand, whilst Elzemieke had a more central balance in the Saucony, she may find that this shoe slightly increases the loading in her knees and upper leg.

The unique combination of your personal running characteristics and the available shoe technologies is the reason why at ARION, we focus on your unique running identity, combining your individual biomechanics with specific shoe technologies that bring you the biggest possible benefits. Stay tuned as we continue to test another pair of the latest and greatest running shoes every two weeks and start to explore some comparisons between the different shoes that we test.

If you want to discover your running identity visit your nearest HUB in one of our ARIONHUB stores to learn more.